The Network Time Protocol (NTP) is a method to synchronize clocks to UTC (timezones are set locally by the administrator). The general goal of this software is to ensure that time is monotonically increasing, e.g. NTP will not skip a clock backwards in time and only makes adjustments that slow or speed up the local clock to move it towards the true definition of time. NTP will minimize offset (the difference from true time) and skew (difference of time change rate from the true rate), as it operates on a host.

NTP is required to be running on perfSONAR servers that are performing OWAMP measurements. OWAMP is designed to make API calls to a running NTP daemon to determine the time and relative errors for hosts involved in a measurement. As an example, OWAMP works by sending streams of small UDP packets. Each is timestamped on one end, and then compared on the other end upon receipt. These accurate timestamps are used to calculate latency and jitter on a more fine level than is possible via other methods (ICMP packets used in Ping). It is possible to operate the perfSONAR tools without a running NTP daemon (e.g. by using certain switches in the tools to disable the check of time), however the resulting measurements of network performance will be skewed due to the lack of accurate timekeeping.

If NTP is being configured manually (e.g. editing /etc/ntp.conf), there are several key points to be aware of to ensure that time is as accurate as possible on the host:

NTP can be queried on a machine using the following command:

Additional statistics can be found using this command:

Even on well tuned servers, time abnormalities can be witnessed due to the sensitivity of tools like OWAMP. NTP works hard to get your host to within a couple of milliseconds of true time. When measuring latency between hosts that are very topologically close (e.g. LAN distances up to 5 milliseconds), it is quiet possible that NTP drift will be observed over time. The following figure shows that calculated latency can drift on the order of 1/2 a millisecond frequently as the system clocks are updated by NTP in the background. 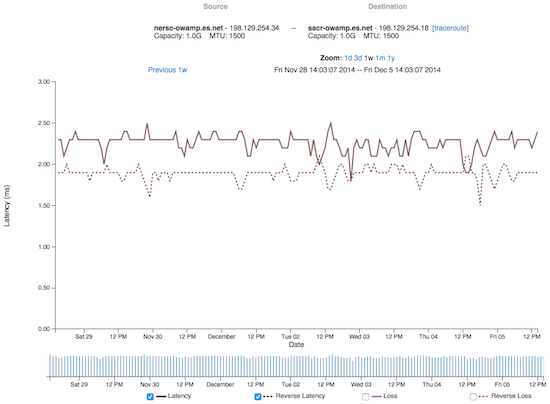 The next figure shows a closer view of this behavior. Clocks will drift slowly between the intervals that NTP adjusts them, particularly if NTP has stabilized and is running every couple of minutes instead of a more frequent pace. 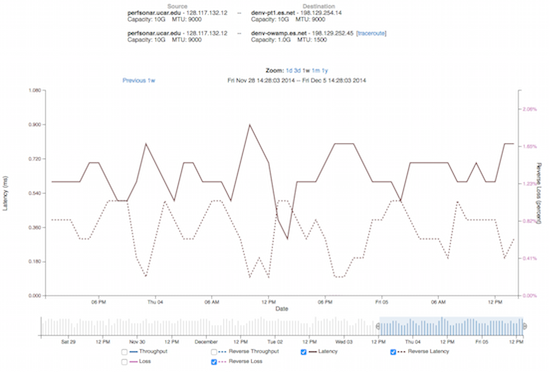 Hosts that are further away will not see this behavior, as the difference of a fractional millisecond is less important when the latency is 10s or 100s of milliseconds. 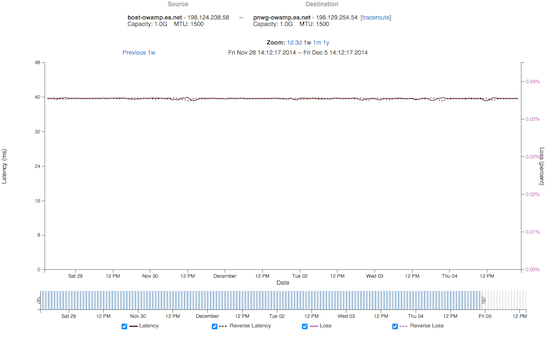 There have been reports that perfSONAR produces inaccurate or impossible (negative) results when testing transit time on networks whose latency is in the sub-millisecond range (i.e., less than the clock accuracy provided by the Network Time Protocol served by hosts on the Internet). This is expected, although not necessarily desirable, behavior. It has further been suggested that perfSONAR should integrate support for the IEEE 1588 Precision Time Protocol (PTP), which can discipline a computer’s clock to within tens of microseconds, eliminating this problem.

While the perfSONAR development team’s goal is to provide the most accurate measurements in as many situations as possible, there are two factors that lead us to question whether PTP support is a project we should undertake.

First is the benefit to perfSONAR’s primary mission, which is identifying network problems along paths between domains. The latency in those paths tends to be large enough that NTP’s millisecond accuracy is sufficient for most testing. Installations requiring better have the option of installing local stratum-1 NTP servers, some of which can be had for under US$500 and have been known to discipline clients’ clocks to well under a quarter millisecond.

Second is the deployment cost of PTP, which is currently very high. A campus wanting to use it would require at least two grandmaster clocks (US$2,500+ for basic models) and every router and switch between the grandmasters and perfSONAR nodes would have to be capable of functioning as a boundary or transparent clock. This feature is usually found in switches designed for use in low-latency applications, not the workgroup switches that end up in wiring closets. The least-expensive, PTP-capable switch we are able to identify is the Cisco Nexus 3048TP (48 1GbE ports plus four 10 Gb SFP+) at US$5,000. Using this equipment to upgrade a 25-switch installation would put the capital cost at about US$130,000 for just the infrastructure, or US$1,300 per perfSONAR node in a 100-node installation. In addition, all systems running perfSONAR would also require NICs with hardware support for the timestamping that makes PTP work accurately. While software-only PTP clients exist, they may suffer inaccuracies induced by the vagaries of running under a general-purpose operating system and provide inaccurate results when testing in a LAN environment.

Because of these two things, support for PTP is not currently on perfSONAR’s development roadmap. That said, the team welcomes user feedback and uses it to measure demand for new features and how much priority they should be given. If a large enough contingent of users is deploying PTP in their networks and believes the additional accuracy would be useful, it will be considered for a future release.