The perfSONAR project maintains a graphical interface to the services directory of all perfSONAR nodes. It can be found at this link:

Interacting with this service can be done by scanning the map to find an instance where you may know a location, or by trying to search on specific terms.

As an example, a search for “es.net” will return hosts that have that domain: 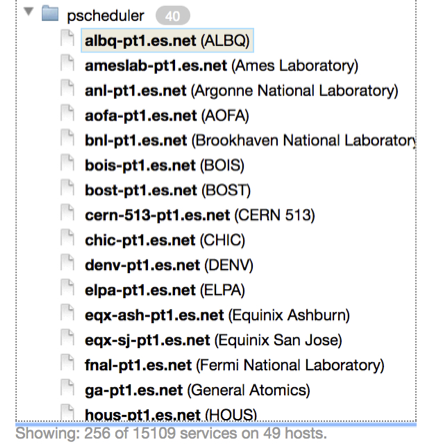 Clicking on a host will bring up specific information about the software and hardware:

Searching the map after narrowing the results will place specific red beacons for each host. Zooming into a region that has a larger red beacon will show where individual nodes are located: 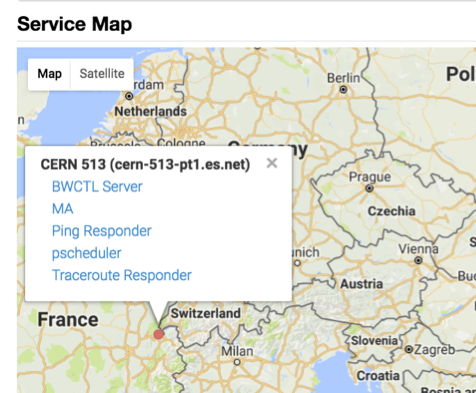 Note that map functionality relies on accurate latitude and longitude information, that is entered when the machine is configured. Machines that have inaccurate information will not be placed correctly.

There is a Python client available for the sLS that offers basic query functionality. The sLS client comes with two wrapper functions:

These can be installed via easy_install:

For example, you can run:

If you are debugging an end-to-end problem crossing several domains, it is helpful to locate perfSONAR instances along this path. More instances help to divide and conquer a problem more effectively.

In the event that you are not able to locate a perfSONAR node in a domain, the following strategies can be used when dealing with the domain administrators:

Each deployed perfSONAR testing resource is owned, operated, and maintained by the deploying site; the perfSONAR project does not maintain any central control over these testing resources. Given this fact, it is pollite to always remember that measurement testing consumes network resources, and some facilities may appreciate testing traffic more than others. The perfSONAR project recommends a couple of guidelines when setting up tests to consider the nature of testing for networks of all sizes.

Sites may choose to impart other restrictions:

In general, a perfSONAR resource will allow open testing unless someone has explicitily prevented this from occuring. Consider several high level things when testing:

Depending on the testing interaction that is desired, there are several interaction strategies: